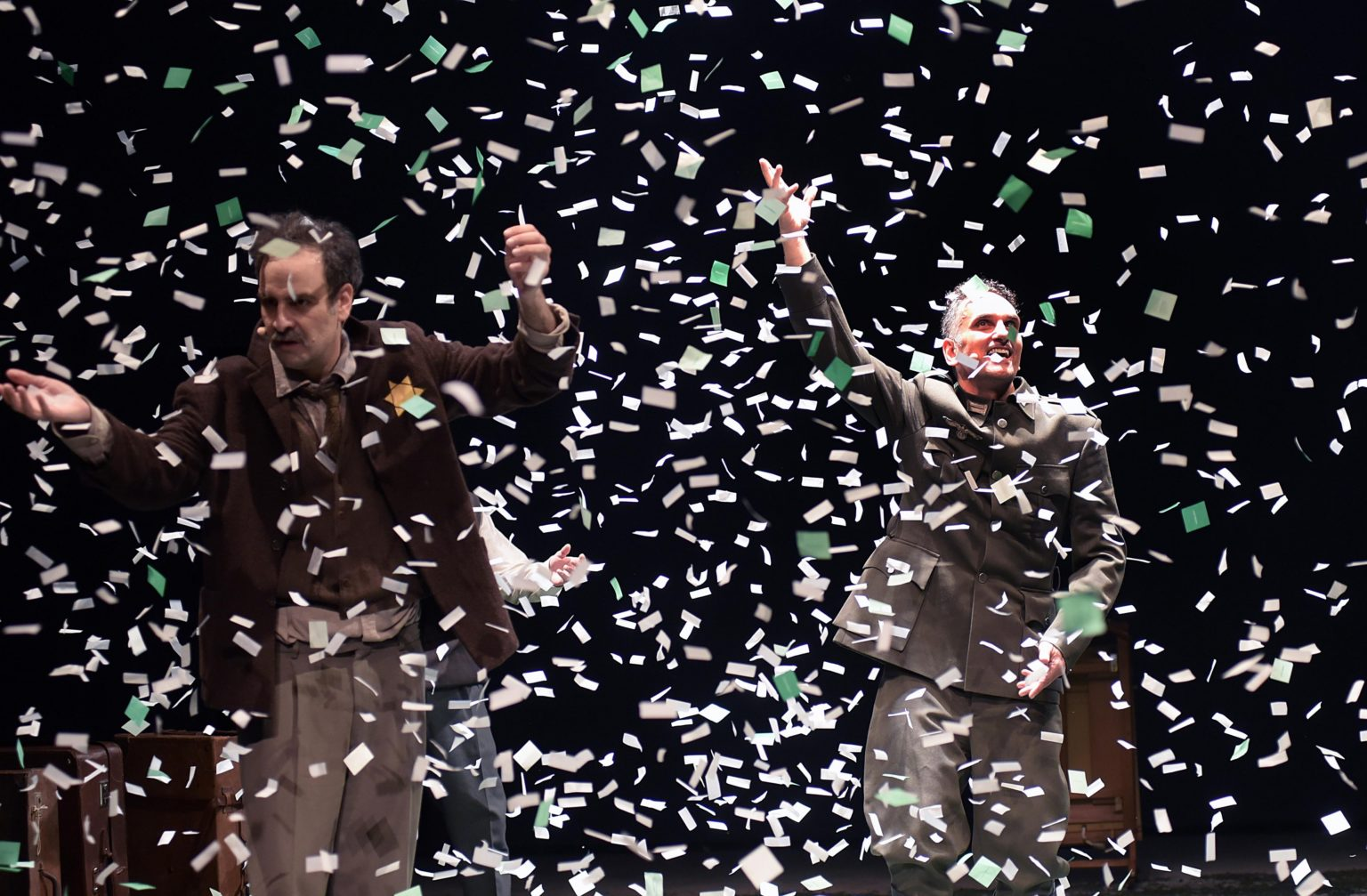 Translated from the Spanish by Stefanie Gerhold

The just published Schattenschwimmer. Neue Theatertexte aus Spanien (Neofelis Verlag) will be presented at the Frankfurt Book Fair in collaboration with the Theater Heidelberg. The book will be briefly presented in the afternoon at 16:00 at the Spanish pavilion as part of the staged reading of María Velasco’s play Ich will die Menschen ausroden von der Erde (translated by Franziska Muche) and the same evening at 20:00 in the Künstlerhaus Mousonturm.

The centrepiece of the book launch will be a staged reading of the play Himmelweg by playwright and theatre director Juan Mayorga (translated by Stefanie Gerhold), one of the most important figures in the Spanish theatre scene. Himmelweg was written back in 2003 and is his most performed play worldwide, only it had not been translated into German yet. It deals with illusion and reality, with the nature of theatre and with Theresienstadt. In this way, it explores a topic that is equally virulent for Germany and Spain: confronting a past that cannot be overcome. It is about the culture of memory and the narratives in which theatre deals with this. Himmelweg is now available to German-speaking theatres and interested readers for the first time in the anthology Schattenschwimmer.

After the reading, staged by the Theater Heidelberg, there will be a panel discussion on The Power to Interpret and Taboo: Memorial Cultures in Comparison. Who gets to decide how social narratives of cultural identity get to be interpreted? What taboos are there in memorial culture? What remains unsaid as a result?

The panel discussion will be with the writer Juan Mayorga (tbc), his German translator Stefanie Gerhold, Stella Leder, who specialises in anti-Semitisim in the cultural sector, and dramaturge and sociologist Martin Valdés-Stauber (Münchner Kammerspiele and co-curator of the Heidelberg Stückemarkt and the Spain programme at the book fair).

A delegation of the International Red Cross visits a concentration camp. On a guided tour, everything is presented to them as idyllic: people strolling in the park, children playing, colourful balloons. But small inconsistencies irritate the visitors. What at first seems like a play about Theresienstadt, which was used by the Nazis as a “showcase camp”, is a dramaturgically complex text that takes the deception of propaganda as its starting point for disturbing questions: How staged is our reality? Are we part of a play? Where is the limit when we will no longer participate?

The path to heaven (Himmelweg) that is also the title in the original was the cynical euphemism for the ramps to the gas chambers.

Juan Mayorga, was born in 1965 in Madrid, and is one of the most important contemporary playwrights in Spain. He is also a director and teacher, and for a number of years has been head of the masters programme in playwriting at the Universidad Carlos III in Madrid. Since 2018, he has been a member of the Real Academia Española and is currently artistic director of the Teatro de La Abadía in Madrid. Himmelweg is his most successful international play; it has been translated numerous times and received many awards. It premiered in 2003 in the Teatro Alameda in Málaga and has also been performed in theatres such as the Centro Dramático Nacional in Madrid and the Royal Court Theatre in London. The premiere in German took place on the 2nd of July, 2022 in Dinslaken. Juan Mayorga will be awarded the renowned Princess of Asturia Prize on the 29th October 2022.

A cooperation between Drama Panorama and the Instituto Cervantes.
An event by Drama Panorama: Forum für Übersetzung und Theater e. V. as part of the project panorama #2: übertheaterübersetzen, funded by the Federal Government Commissioner for Culture and the Media and the Deutscher Übersetzerfonds as part of the Neustart Kultur programme. In cooperation with Neofelis Verlag Berlin and die taz.