Contemporary plays from the Czech Republic in Berlin: Drama Panorama e. V. and the Czech Centre Berlin are once again organising a festival of contemporary Czech drama – Ein Stück: Tschechien 2018 – this time with two guest productions and a staged reading of three plays.

There is a new generation of playwrights in the Czech Republic whose plays are relevant for audiences all over Europe, but who nonetheless are barely known outside of their own country. The two-day festival organised by the Berlin association for translation and theatre Drama Panorama: Forum für Übersetzung und Theater e. V. in partnership with the Czech Centre Berlin aims to fill this gap.

The festival will kick off with a celebrated production from the Prague theatre Studio Hrdinů, The Actor and Carpenter Majer Expresses his Opinion on the State of his Country (orig. Herec a truhlář Majer mluví o stavu své domoviny) by the well-known Czech prose author David Zábranský on the 26 of May in the tak Theater Aufbau Kreuzberg. For the lead role, Stanislav Majer was awarded the Theatre Critics’ Prize for the actor of the year. The production became the most-discussed topic in the Czech theatre scene and media last year, due to how the author provocatively scratches at the political arrogance of the Czech elite.

On the 6th of June, three contemporary plays will be presented in the form of a staged reading in the gallery of the Czech Centre. David Drábek, one of the most well-known comedy authors in the Czech Republic, will be there with his play It’s Lonely at the Top (orig. Koule), a grotesque deconstruction of the myth of a successful socialist athletic career; René Levínský, a chameleon among Czech authors, hailed as “the Czech Stoppard” by Czech theatre critics, presents his play Nawratilowa, Szymczykowa, in which two women take a journey into the Czech-German past, guided by the stories behind their tattoos; and Roman Sikora, master of current political grotesque will introduce his latest play Castle on the Loire (orig. Zámek na Loiře), a satire of the Czech political situation, portraying lackeys who have imprisoned the wife of a top-ranking Czech politician in a French castle. Sikora’s play was awarded the Grand Prize at the Talking About Borders festival at the Staatstheater Nürnberg and will celebrate its world premiere there at the end of June. We are presenting a shortened version of the play with the kind support of Talking About Borders.

After the reading, we will celebrate the launch of the anthology of Czech contemporary drama Von Masochisten und Mamma-Guerillas (Of Masochists and Mamma Guerillas; ed. by Barbora Schnelle in collaboration with Henning Bochert, Berlin: Neofelis 2018). The book is the first volume from the series Drama Panorama, which was started by Drama Panorama e.V. in partnership Neofelis Verlag. The anthology will present nine contemporary Czech dramas by authors the festival Ein Stück: Tschechien has already worked with or will work with in the future.

On the 14th of June, the Czech production of 2016 is coming to the tak Theater Aufbau Kreuzberg – the production Olga: Horror in the House of Havel (orig. Horrory z Hrádečku) from the pen of young Czech dramatist Anna Saavedra. Directed by Martina Schlegelová from the Prague theatre Divadlo LETÍ, the play portrays the life of Václav Havel’s first wife in a sitcom-style show as a reckoning with the time before and after the 1989 revolution.

The main actress, Pavlína Štorková, was awarded the Theatre Critics’ Prize for best actress in a main role for her role as Olga. 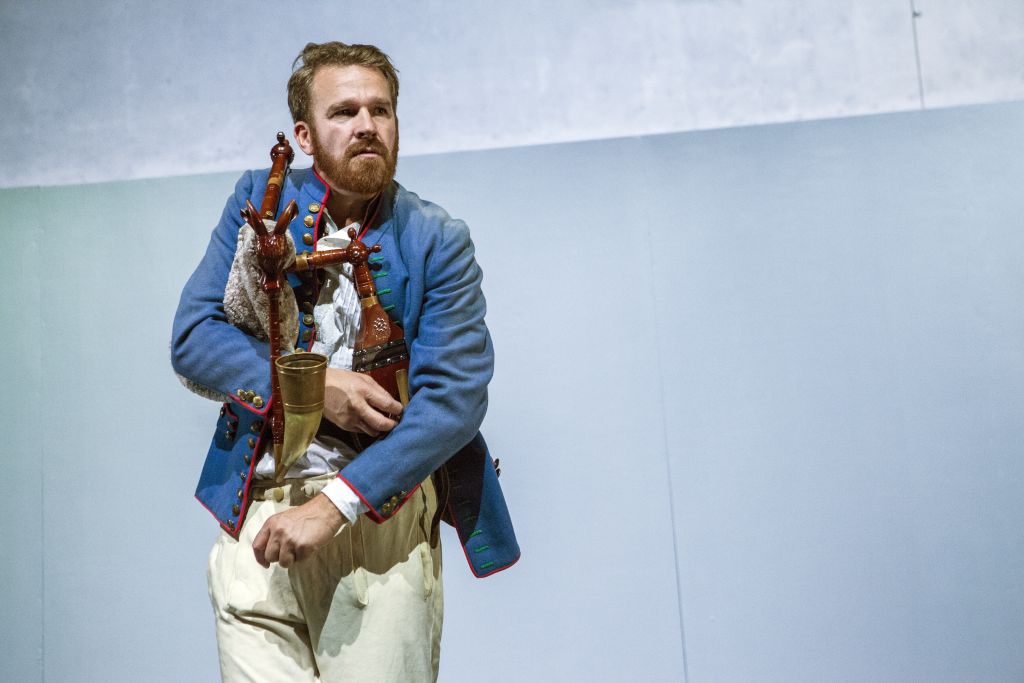 David Zábranský: The Actor and Carpenter Majer Expresses his Opinion on the State of his Country. On the picture: Stanislav Majer | Foto: Ladislav Babuščák

With his first work commissioned for the theatre, well-known prose author David Zábranský caused a lot of furore in the Czech Republic. The Actor and Carpenter Majer Expresses his Opinion on the State of his Country (orig. Herec a truhlář Majer mluví o stavu své domoviny, world premiere 2016) was staged at the Prague Theatre Studio Hrdinů and is an outstanding example of contemporary Czech theatre with its finger on the pulse of the times.

The play focuses on the theme of the nation and what we associate with it, with national identity and the role elites have in defining it. The monologue was written for the actor Stanislav Majer, a well-known theatre and TV actor, whose attitude towards life is examined with sarcastic humour by the author. What does the word “nation” mean in the Czech Republic? And why does Majer feel aversion towards his nation? Is the current president to blame? Or do the Czechs have low self-confidence in general and think that it’s just better elsewhere, for example in Germany? In a similar vein to Bernhard, Zábranský is a cutting observer and analyst of Czech society, in which the concept of “nation” is misused for different purposes. An exciting Czech-German theatre dispute!

In Czech with German and English surtitles, followed by an audience discussion.

For this production, Stanislav Majer was awarded the Theatre Critics’ Prize for best actor in a lead role in 2016.

In Czech with German and English surtitles, followed by an audience discussion

Director of the readings: Eberhard Köhler 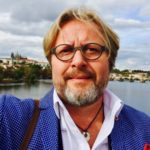 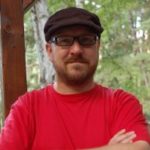 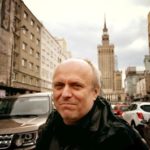 David Drábek: It’s Lonely at the Top (From the Life of a Shot-Putter)

Translated from Czech by Doris Kouba

A fictional portrait of a Czech shot-putter, who won medals for the socialist republic before the fall of the iron curtain and now stages herself as a national hero in a radio interview, without critically reflecting on the dark side of that chapter: the mass doping of the athletes – a pointed tragicomedy and one of the most successful Czech plays in recent years.

Roman Sikora: Castle at the Loire

Translated from Czech by Barbora Schnelle

In this play, a top-ranking Czech politician imprisons his wife in an opulent French castle after she has discredited him with statements made to the media back home. Four lackeys try to understand why she prefers to eat tinned Czech food, rather than French specialities as she redesigns the Rococo castle in the style of Ikea. A highly amusing contemporary political play with very dark humour.

Presented with the kind support of the Talking About Borders festival at the Staatstheater Nürnberg, where the play will have its world premiere as the winner of the competition on the 28th of June.

Translated from Czech by Matyáš Levínský and Daniel Meier

Two passionate women take a journey into the Czech-German past, guided by the stories behind their tattoos, mixing history and mundane everyday themes. Written as a homage to István Örkény‘s Katzenspiel (Catsplay) and the documentary film Flammend‘ Herz (Flaming Heart) by Oliver Ruts and Andrea Schuler.

This will be followed by the awarding of the festival audience prize.

As part of the staged readings, there will be a book launch of the newly published anthology Von Masochisten und Mamma-Guerillas: Neue tschechische Dramatik (ed. by Barbora Schnelle in collaboration with Henning Bochert), Berlin: Neofelis, 2018 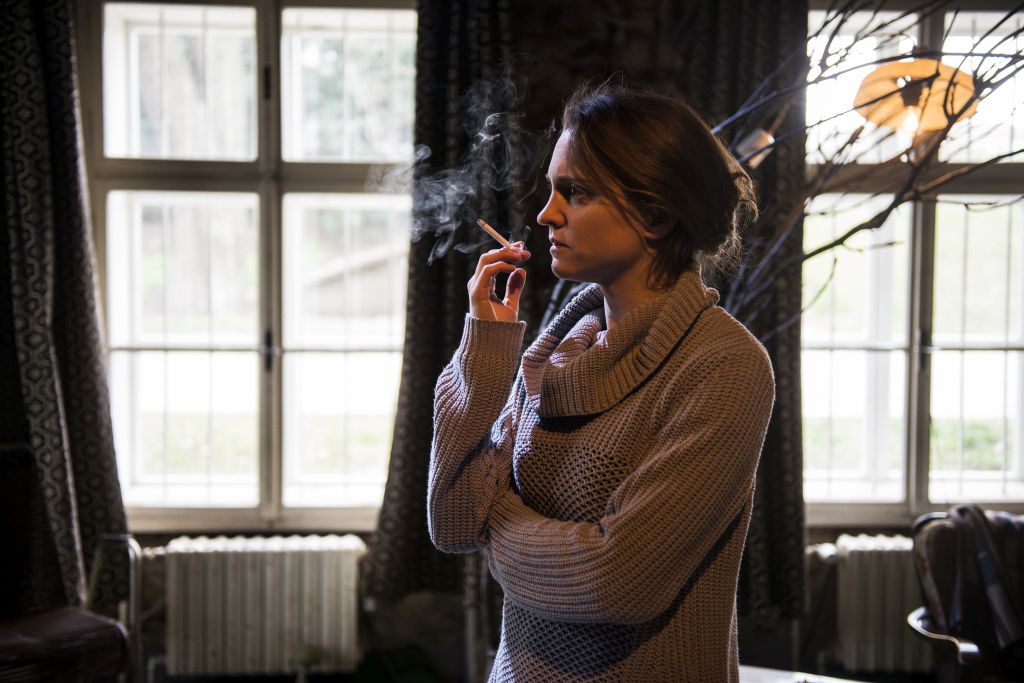 What happens when dissidents become president? How does power and its performance change the everyday life of a relationship that was formed during the times of the Czech resistance against the totalitarian regime? We find ourselves in Václav Havel’s famous weekend house “Hrádeček” (eng. “little castle”), the play is supposed to be about his first wife Olga (immortalised in Havel’s Letters to Olga). However, she repeatedly interrupts Havel and puts his desires in the foreground. With her no-nonsense character, Olga is a cynical commentator on political change – from wild dissidents’ parties to state receptions. The biographical material serves the show as a basis for a sitcom-style portrait of a woman who defies life with her self-irony.

The production has won many awards: Play of the Year and Best Actress at the Theatre Critics’ Awards 2016; Production of the Year at the 2016 Theatre Magazine awards.

In Czech with German and English surtitles, followed by an audience discussion.

We offer a short introduction at 7 pm.

Duration: 2.5 hours with an interval

In partnership with the Theater Studio Hrdinů and Divadlo Letí

Both guest productions will be in Czech with German and English surtitles, followed by an audience discussion.
Tickets and reservations: tak-berlin.de/tickets or info@drama-panorama.com

The festival is funded and supported by: