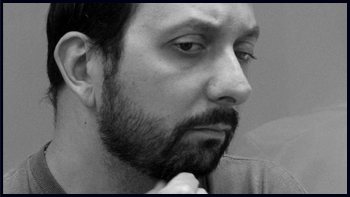 Spanish playwright and director Gabriel Ochoa will be in Berlin from 15th-20th February, where he is invited to the Berlinale (Film Project Marketplace).

Hedda Kage, who has translated three of his plays into German (DEN HAAG, BEGEHREN UND LUST* (in collaboration with Eduard Bartoll), GERECHTE? KRIEGE?), would like to invite Drama Panorama friends and colleagues to meet the author/director on the 16th February at 18.00 in the ITI Mime Centrum, Kunstquartier Bethanien, Mariannenplatz 2.

For the occasion, Hedda Kage will translate a few pages of  Gabi Ochoa’s new play and read them with Henning Bochert.

Julius is the presidential candidate – Cesar is his advisor. Populism, manipulation and beatryal in political discourse are the subjects of this play – the power of the word. LA PALABRA.

*A staged reading of the German translation Begehren und Lust by Hedda Kage and Eduard Bartoll, followed by a talk with the author chaired by Franziska Muche, took place as an event organised by Drama Panorama on the 13th February 2014 in the ITI Mime Centrum Berlin.

GABRIEL OCHOA from Valencia is a playwright and director, as well as a film director, script-writer for film and TV, and a member of AVEET (Associació Valenciana d’Escriptores i Escriptors Teatrals).

He also runs the residency programme for playwriting in Valencia, which he founded (www.creador-es.com).

We hope you can join us!